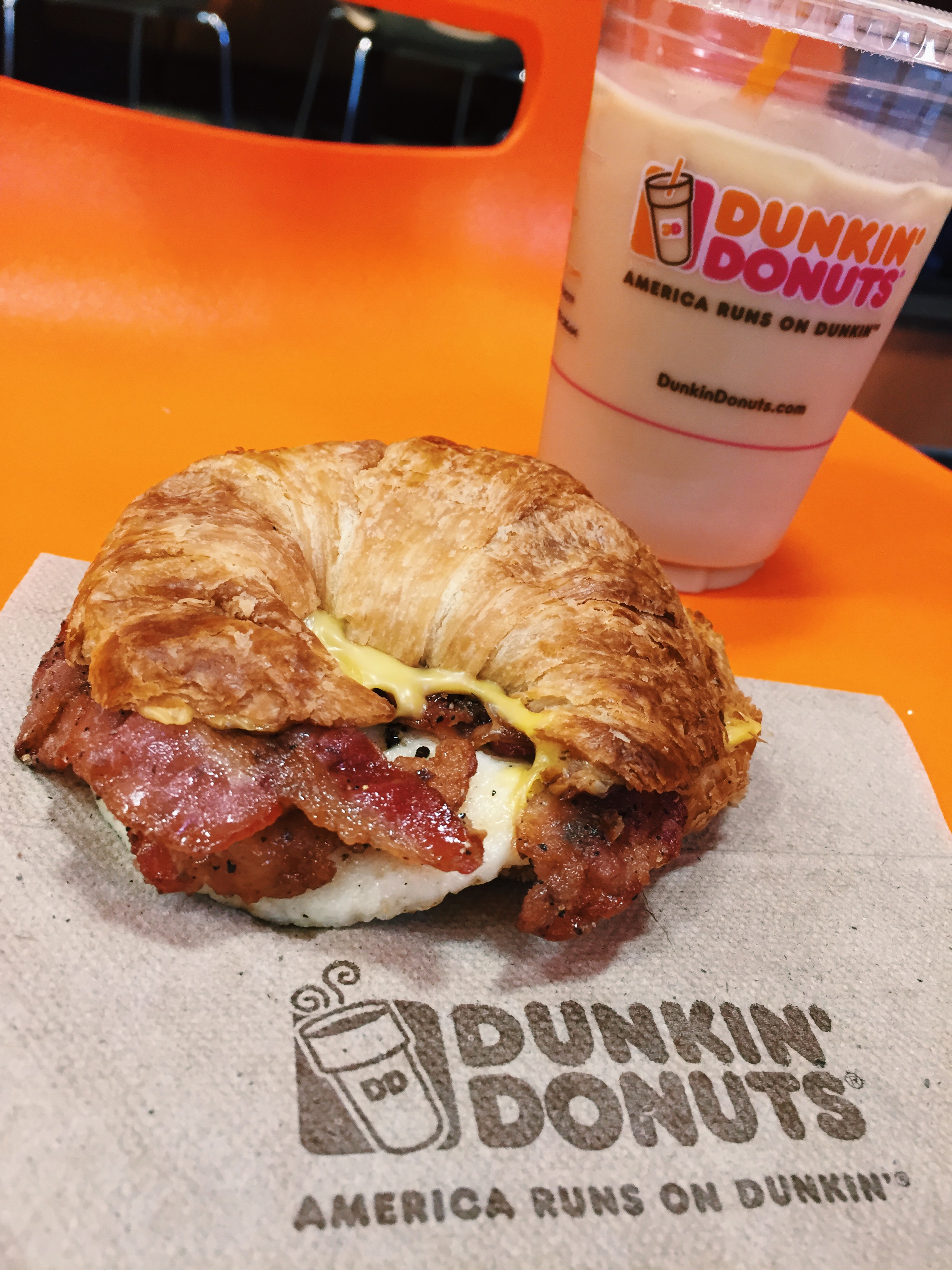 Here’s something some of you don’t know about me: I like fast food. Like, a lot. I know to some of you that might be a bit strange, considering I review restaurants of the higher end variety, I cook creatively, and consider myself to have a good palate. But put your judgment aside for two seconds, because when you grew up the way I did, fast food was a staple. My dad didn’t cook, so it was fast food all day and night. New Years Eve Dinner was Dominos (seriously, and I loved it). Birthday meals? Roy Rogers (do those still exist?). And Dunkin’ Donuts was especially nostalgic to me for a few reasons.

1 – My mom drinks about 12 gallons of Dunkin’ Donuts coffee a day. If she doesn’t have a cup of DD in her hand, I get concerned that she’s having a stroke.

2 – My Aunt Cali used to bring over a box of Munchkins whenever she babysat me and my brother. We called her The Donut Lady. I think I called her that well into my teens, if I’m being honest.

3 – The BEC on a croissant from DD was (and still sometimes is) my go-to hangover food. It was college, money was tight, it was convenient, and frankly not enough people serve BEC’s on croissants.

To that end, when I saw the new Sweet Black Pepper Bacon Breakfast sandwich, I had to try it.

First of all, there’s 4 strips of bacon on this thing, so that’s money right there. Double up, or #BaconUp, as they say. You can see the flecks of black pepper throughout the sandwich, and the bacon just hangs there, begging you to bite it. The bacon tastes like it got a light drag through some maple syrup, which is awesome. It’s tasty and I would eat it again, 100%, even soberly! We all have our guilty pleasures and this one happens to be one of mine. Also, the DD hashbrowns are my weakness. Have you had them?? They’re kind of my favorite. Here’s a fun story told in the third person (because why not?):

Dara wakes up hungover. Dara has a meeting. Dara stops at DD along the way and gets two orders of hashbrowns. Dara puts them in her purse. Thinking she’s stealth, Dara eats some right from her purse which has now become a hashbrown holder. Dara gets to meeting. Client interrupts meeting and says, “do you smell fries? Or potatoes or something”? Dara says “yes, I have hashbrowns in my purse”. Clients clap for Dara. This is a true story.

Now everyone clap for Dunkin’ Donuts because the Sweet Black Pepper Bacon sammy is a winner. AND you can get breakfast sandwiches at DD all day. I’m here to remind you that you too can carry hashbrowns in your purse to afternoon meetings! Helpful tip: You can get the black pepper bacon on ANY breakfast sandwich!