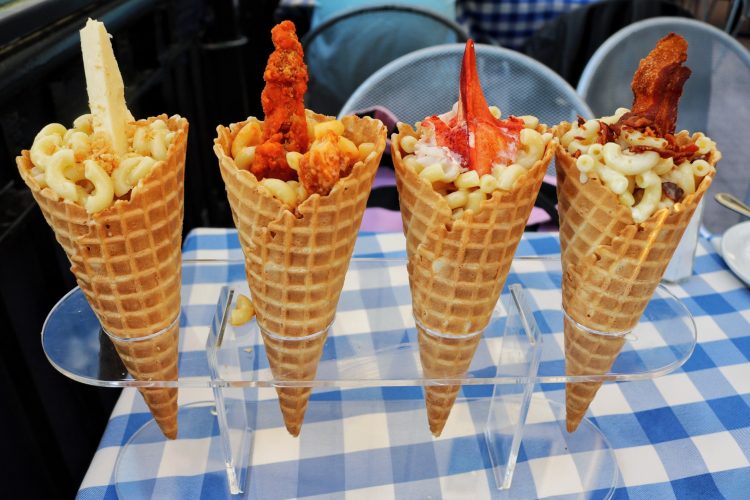 Yes, you read that right.

THEN TOPPED WITH THINGS LIKE BACON, LOBSTER, BUFFALO CHICKEN, AND EXTRA CHEESE.

Sometimes a restaurant will totally sell out for the gram, and I am always skeptical of it. Because let’s face it, most things that are “too much” are exactly that: too much. Black Tap milkshakes? I get it. They’re fascinating. But they aren’t THAT good. Sorry – I think Black Tap is actually way better at burgers. But I digress. In the case of Merchants River House, it actually photographs well and isn’t TOTALLY insane. Like, I actually ate these. In fact, I can rank them in order of my preference: Call me a mac n cheese purist, but I’m not a huge lobster mac n cheese fan. The only one that I really, truly enjoy is from Catch (of all places). When you start your meal with a quartet of carbs and cheese, you may want to lighten things up with a few salads, and take in the pretty views of the Hudson whilst sipping a glass of rose. Totally healthy. Enter Caesar Salad and Brussels Sprouts Salad. I preferred the Caesar, but with that much shaved parm and crusty, cheesy bread, can you blame me? Quick shoutout to the spinach artichoke dip too. Not so much the dip itself, but the little pita chip things that came with it. I actually have no idea what these were made out of. Maybe it was bread. Maybe it was potato. Either way, they were deep fried and wonderfully fluffy. Worth the cals, 100%.