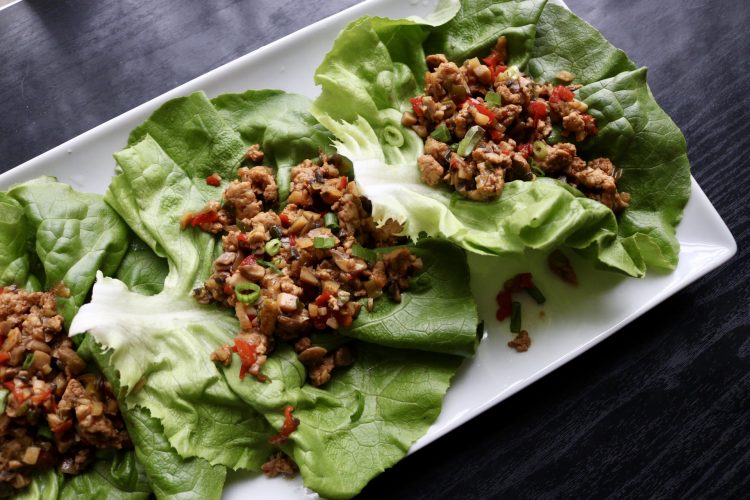 Before I jump in to this deliciousness, let me state, for the record, that this recipe is adapted from Chrissy Tiegen’s cookbook, Cravings. I have a large collection of cookbooks that I draw inspiration from and this one is no exception.

When I opened the page to “french toast casserole with salted frosted flakes” I was like…mmmk yea I’m in. It’s a great cookbook and if you don’t have it, I suggest you buy it. You can do that here on Amazon.

There are a bunch of recipes in this book that I could have started with, but I was drawn to these chicken lettuce wraps. Maybe it was the Asian-inspired flavors I was craving, or maybe because I’m trying to cut back on the carbs (it’s January, that’s what we’re supposed to do now, right?) Either way, I thought they were delicious, but a touch heavy on the ginger for my taste. Obviously that’s a personal preference, but I found the amount in here to be a little too much for me. So in my version of this recipe, I used 1 teaspoon of fresh minced ginger each (one for the filling and one for the sauce). Hers called for more.

Also, I should mention that this recipe is A LOT of prep work. A lot of dicing and chopping. It says 15 minutes prep time but I’m gonna call bullshit on that because I was chopping/mincing shit for at least a half hour, maybe more. And I’m pretty fast with the knife. So, while I maintain that it was VERY tasty and worth the effort, you might want to prepare yourself for the chopping and dicing. Total cook time for me was a little over an hour. I don’t love cutting corners on fresh ingredients, so I kept most of that the same. But if you find pre-chopped mushrooms, peppers, and water chestnuts, I say go for it. And her photo looked a lot saucier than mine, so I assume that was done specifically for the photo. But if it were up to me, I’d make an extra little batch of that sauce to pour over the top. If you get stumped on some of the ingredients, you can find Thai sweet chili sauce and hoisin sauce in most supermarkets in the Asian ingredients part of the store.

Bonus: plenty of leftovers and they taste even better the next day. I also added the sliced avocado to my lettuce before wrapping it all up, hence why you can’t see it in the photo. BUT SO YUMSIES. As always, thanks to FreshDirect for the ingredients! #FDambassador