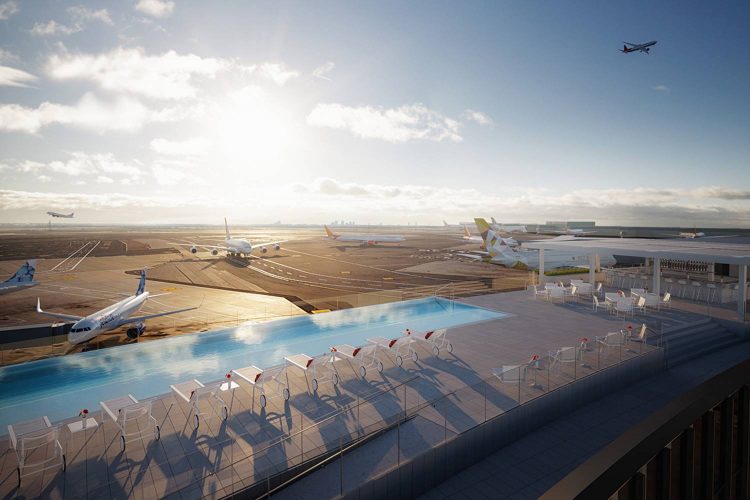 I don’t even know where to start with this one…easily one of the craziest things I’ve ever seen. And I’m a born and raised New Yorker. I’ve seen some shit.

This is a hotel. It’s TWA-themed. It has a pool. Oh, and one small thing: the pool is basically on the tarmac at JFK.

Ok, actual details are: The Pool Bar and The Sunken Lounge are owned and operated by Gerber Group (Mr. Purple, Campbell Bar). The Pool Bar & Observation Deck at TWA Hotel is 10,000 square feet of both action and relaxation. Literally sitting on JFK Runway 4 Left/22 Right, the 63-by-20 foot infinity edge pool is a major attraction. Come winter, it turns into a “pool-cuzzi” because the water can be heated up to 100 degrees. Not to mention the water is purified every 30 minutes, whereas the average pool recirculates every 6 hours.

Here’s the thing. I know airport hotels exist, but this is next level. The design is impeccable and pristine; I felt like I took a time machine instead of the AirTrain.

That said, I’ll be honest in that I think it might take a hit in the winter months, but who knows, the “pool-cuzzi” idea sounds kind of awesome. I happened to go on a day in the summer when the only thing that would have been worse would be sitting directly on the sun. It was THAT hot. We were at a table with zero shade, but hey, that’s what cocktails are for, right?

I had probably 5 Moscow Mules. Don’t judge me. I was dehydrated. The cocktail list was impressive though, and run $16 a pop. Try the Mile High Spritz (vodka, St. Germain, fresh lime juice and prosecco) and the Watermelon Collins (Aviation gin, watermelon, club soda, lemon juice and agave).

The Fish Tacos ($20) were really tasty and perfectly fried with a nice crunch. The Roasted Chicken Panini ($19) I found to be fine, albeit a bit boring – not to sound like a snob but it was just missing something. There was arugula, tomato and horseradish aioli on it, but I didn’t taste too much of that aioli. For health, we also got the Hummus ($16) which was actually a big, gorgeous bowl of creamy hummus topped with assorted crudites and crackers. I’m always surprised when I like the healthy stuff. Lastly, the Salt & Pepper Fries ($10) were on point, but it’s hard to mess up fries (thank god).

The day was wrapped up after a much needed dip in the pool, which was the perfect temperature. If I’m being totally honest, the views make the trip worth it. Where else can you take a dip in an infinity pool and watch planes take off? It was awesome. No regrets.

I should mention there is also The Sunken Lounge inside, where I didn’t get to spend much time, but it has amazing retro vibes. If you’ve seen Catch Me If You Can, you’ll feel like you stepped into that movie set. You can also check out Connie, which is a former TWA Aircraft that has been turned into a cocktail bar.

If you’re staying at The TWA Hotel, you can access these spots any time, but if you’re not staying there, you can buy a day pass for $25 on weekdays, and $50 on weekends. Honestly not a bad price for the experience. There are rooftop pools in Brooklyn with barely any views that charge double that amount. Lounge chairs are first come, first serve, and can’t be reserved, so keep that in mind. But, #lifehack: you can make a reservation at The Pool Bar to eat/drink, and then you can also use the pool during that time (which is what I did).

For more info on the space, directions, and to make reservations, click here!