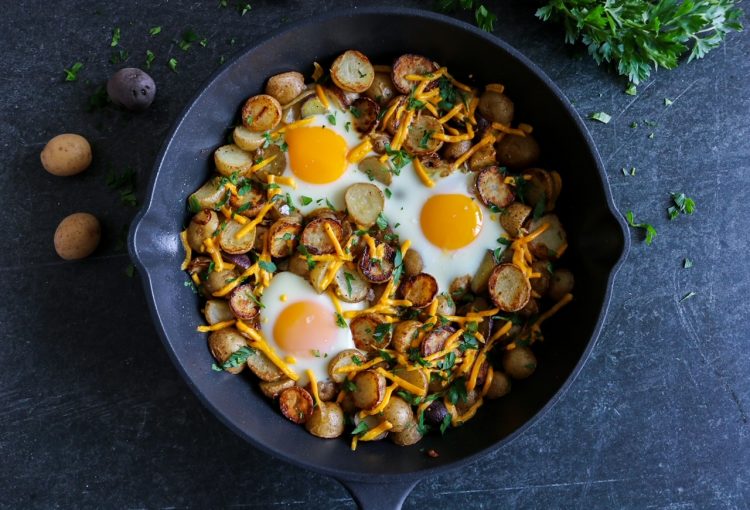 Alright I’m going to level with you – I don’t make a ton of things with vegan products. For those of you who know me, that’s probably not a huge shock, but I’ve been experimenting a bit more here and there (due to slightly elevated cholesterol levels), and I’ve actually come to like some of them. Bless the advances in technology/cooking science I guess.

My favorite part of the vegan cheese? The packaging. Hear me out. It LITERALLY says “it melts!” and “it stretches!” on the front of half of them.

But anyway, I have discovered a few brands that I actually like, and Daiya Cheddar Cheese shreds are one of them. Here’s another few I like:

In terms of this recipe – it’s barely a recipe. Just make sure you have a cast iron pan or other oven-safe skillet, and create the wells with the potatoes deep enough so the eggs don’t run all over. The potatoes I used were from The Little Potato Company and I found them on FreshDirect. They’re like little baby potatoes! Click here to see. But you could just use regular potatoes and cut them into small chunks too.

Lastly, you could really amp this up with bacon and real cheese. Dara from 10 years ago 1000% would have done that, but I have to accept my fate as I take these steps towards my own demise. Enjoy the health while you can fam.

Thanks to FreshDirect for the ingredients! #fdambassador