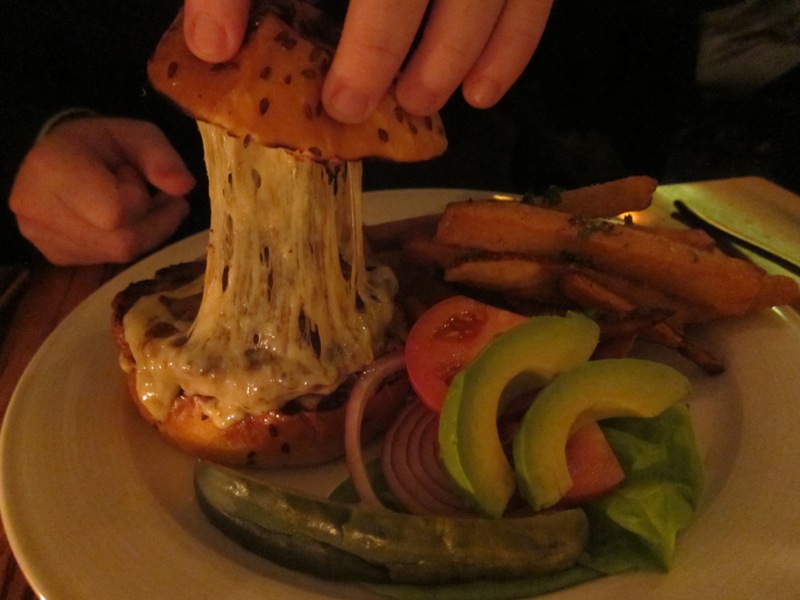 PERILLAAAAAA!! I want to fall to my knees a la Marlon Brando in A Streetcar Named Desire and bellow this from the depths of my soul. PERILLAAAAAAA!!!

Dramatic? Maybe. There is a reason, I promise, and that reason just might be made of duck. My friend Gil (who, you may have noticed, has been upgraded from to “friend”), has been going on and on about Perilla since we’ve met, and since I absolutely LOVED the meal, I felt it might be time to upgrade Gil from to “friend”. So congrats Gil, you are officially my “friend”. Be happy – not many people get to enjoy this privilege. And not many people get to dine with the Mayor of Perilla either; Gil checked in on Foursquare and was announced Mayor because he has been there so many times. A night of good fortune, I say! FYI being the Mayor of a restaurant has it’s perks…read on to see what I’m referring to.

Perilla is located in the West Village near a bunch of your favorite dives like Down the Hatch, but you can expect to see a slightly more buttoned up clientele here; it’s not fancy by any means, but it’s modern and warm, and the dim lighting doesn’t hurt either. I’d recommend Perilla as a good date spot.

Normally I take the lead on menu decisions, but in this case, I was with the “Mayor”, so I let him guide me on a few things. I did the Restaurant Week menu, and then we ordered a few things off of the regular/bar menu. From the Restaurant Week menu: mussels in ham, chervil and Riesling cream sauce for appetizer, pappardelle pasta with bacon, black trumpet mushrooms and braised kale for entree, and vanilla bean bread pudding for dessert (all for $35 – gotta love RW!). Gil ordered the spicy duck meatballs as an appetizer and the spicy duck burger from the bar menu as an entree. We split everything, so if you’re thinking that’s way too much duck, you’re WRONG.

Mussels were plump, but it was really all about the sauce. Isn’t it always? I’m pretty sure half of the people who order mussels do so for the “bread dunked in sauce” factor. The spicy duck meatballs on the other hand. Oh. My. God. If you think you don’t like duck, you need to taste these first. Sitting in a spicy and flavorful jus, four little meatballs are topped with a quail egg that you break ever so delicately over the top, then, you spoon one into your mouth and let it just…melt. The spice is not super hot, it’s more of a mild heat that stays with you to the last bite. You can taste the sweetness of the meat and there is considerably more fat which makes it more tender than a regular meatball. So delicious. Someone…hold me.

The entrees were a continuation of tastebud glory. Hats off to Chef Harold Dieterle (a Top Chef alum) for putting together one of the most delicious menus I have had in a while. The pappardelle pasta was on the salty side, but it was damn good anyway. I will risk high blood pressure for that pasta – loaded with brown butter and bacon, (there’s your salt culprits!) the kale and mushrooms added a nice earthiness to it – a great pasta for winter. Good thing we shared though, because that one was heavy.

Now. The spicy duck burger. Imagine those heavenly meatballs I described two paragraphs ago, just remove the egg, and put it on an onion bun with some jack cheese and avocado. Drool. Fest. Keep in mind this is only on the bar menu, so if you want to stick with the RW menu you’re shit out of luck. I would definitely splurge for this burger though ($16); if you’ve never had a duck burger, this would be the place to try it. It’s juicy, buttery texture is not like any other burger I’ve ever had. The avocado just makes it sexy. Yea you heard me – I’m calling a burger sexy!

I’m going to interrupt the lovefest here for ONE second to discuss the only disappointing dish of the night: the bread pudding. Maybe it’s RW, or maybe Chef Harold should stick to meat, because this was not very good. It was dry. Bread pudding is supposed to be a moist, creamy blob (for lack of a better word) of bread pieces, and this was just…dry. And not very flavorful. Fortunately, the “Mayor” was in the house, so we received the “Take 5 Sundae” ON the house! A sundae inspired by a candy bar? Awesome. Peanut butter ice cream, pretzels, dulce de leche, chocolate syrup and whipped cream. If you don’t like this combination, I don’t want to know you.

If this review doesn’t make you want to go to Perilla immediately, then I guess I’m not a very good writer. I highly recommend it. Don’t miss the duck!