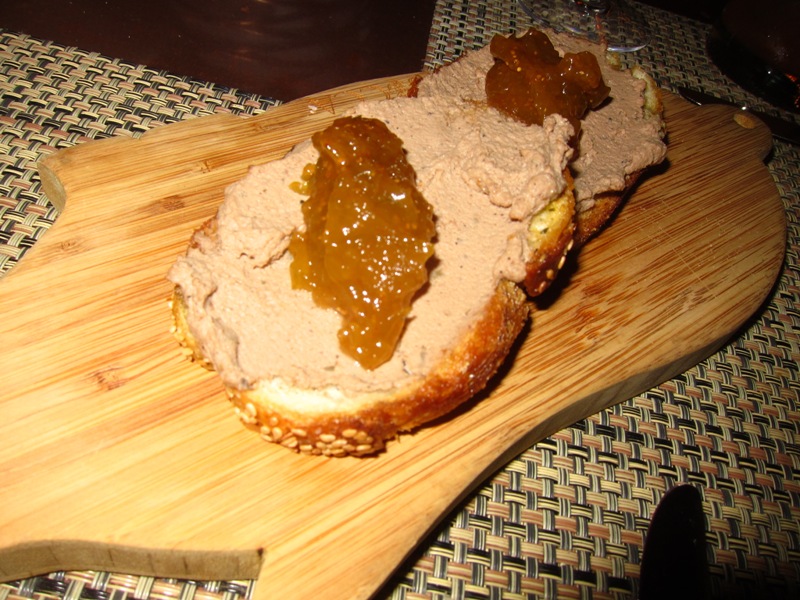 These days, it’s strange how we find it hard to appreciate a good meal when the restaurant in question isn’t blasting Top 40, swarmed with suits and models, or featured in the latest writeup by Pete Wells. Don’t get me wrong, I have been guilty of this myself (and I got nothin’ against Pete Wells), saying things like “yeah, it was good…but no one was really in there.” We say it as if we don’t understand WHY no one was in there, because the food is actually really good. I had such an experience with Bocca last week. Granted, I went to a nice, semi-romantic Italian dinner on a Monday…with a girl no less..but still, the place had us and a few other tables. That’s it. Sometimes this isn’t a bad thing – waiters are more attentive, friendly, and willing to help with menu decisions. We did a tasting of a few of the chef’s favorites, and paired each course with a wine. Really not a bad way to end a Monday, right?

If it wasn’t for the hustle and bustle of Park Avenue nearby, I would have felt like I was in a pretty little restaurant in Italy. The owner, Alessandro (formerly of Cacio e Pepe and Spiga), the waiter, and the bartender, all have beautiful Italian accents. Call me a jaded New Yorker, but I love when that happens – makes it feel more authentic. And I don’t mean the type of “authentic” you find in Little Italy. As our first course came out, we sipped our wine and took in the beautiful plates in front of us: burrata cheese, arugula, balsamic vinegar,  and peaches. The combination of peaches and balsamic vinegar is tart and sweet, while the cool, creamy burrata just melts on your tongue. Burrata is a softer mozzarella cheese – picture a thick rind on the outside, and a creamier, milkier consistency on the inside. Yes, milkier is a word…I think.

For the love of all that is good and pure, I beg you to try duck liver pate. I know, it doesn’t sound all that appealing; for some reason, liver gets a really bad rep, but it’s actually delicious when it’s made in pate form. This duck liver pate on rustic Italian bread topped with fig marmalade was the epitome of everything I love about being a foodie: fatty, savory, complex, and indulgent. If you haven’t tried it, it’s hard to describe. So keep an open mind and just. try. it.

The old Skinny Pig would never go to an Italian restaurant and order seared tuna or tuna tartare. She would think that’s better saved for sushi, not a place where pasta and parmesan falls from the heavens. The new and improved Skinny Pig has discovered that Italian restaurants can make tuna just as well as your local sushi chef. A seared tuna medallion over eggplant puree and topped with eggplant caponata (peppers, onions, eggplant) was smoky and deep. The tuna tartare with capers, herbs and a hint of acidity from citrus was light and refreshing; Alexis doesn’t even eat fish and she said it was “delicious”.

Remember that talk about pasta and parmesan falling from the heavens? Well, it does at Bocca, and it came in the form of oxtail ravioli in a mascarpone cream sauce with porcini mushrooms and peas. Never have I had oxtail ravioli, but it was really good – sort of reminded me of short ribs in taste and texture. Another amazing pasta at Bocca was the caprici pasta with cream, sausage, and smoked mozzarella. This one was our favorite; caprici pasta is similar to fusilli (with tubes), but it’s flatter, so it soaks up a TON of sauce. The sausage was a bit spicy, and the smoked mozzarella kept its shape but was still gooey enough to give it that extra hint of deliciousness.

When it comes to desserts (and some of you may know this from reading my blog), my best friend Alexis and I are both foodies, and we’ve been friends for oh, 18 years now. That’s frightening. Hang on. I just had a mini-stroke. And now I might be crying. Anyway, we know each other’s eating habits so well that we can basically order for one another at this point. Little did we know that Bocca knew our habits as well…I saw two plates coming towards us: a panna cotta, placed in front of Alexis, and a chocolate espresso brownie with pistachio ice cream in front of yours truly. It was such a perfect moment. Alexis doesn’t really like chocolate (crazy) and I like panna cotta just fine, but I would throw it on the ground and step on it if someone said “kill the panna cotta or you can’t have chocolate ever again”. The sweet richness and the oozing chocolate out of that brownie contrasted by the cold ice cream…someone save me. I think I could have that dessert every day and not get sick of it.

Despite the “crowd” at Bocca that evening, our dinner and the service really was great; I’d like to go back on a Thursday or a weekend and see how it is. Such classic New Yorkers…we complain when it’s too crowded, and we complain when it’s not crowded. Goldilocks probably lived in a studio apartment in Chelsea with two roommates. Picky wench.