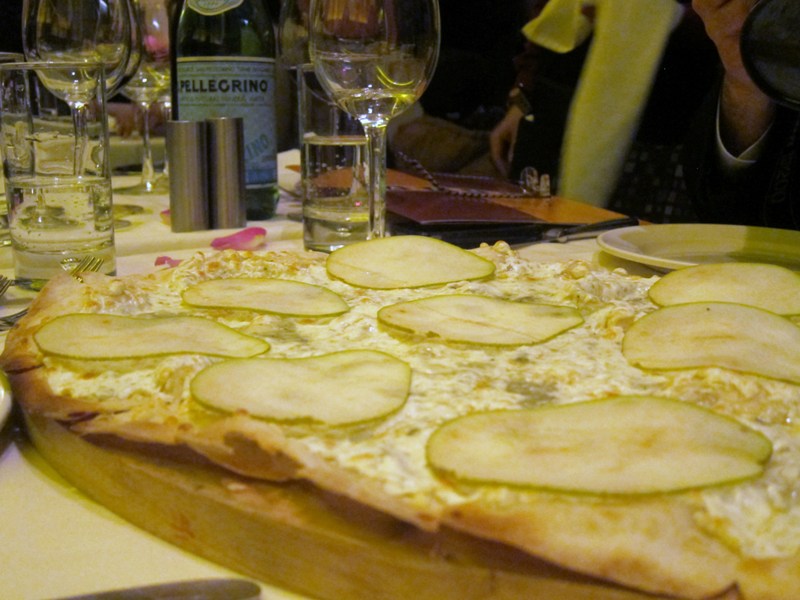 With a name like that, I’m not really sure what all of us were really expecting; a light salad and grilled chicken is not what you will be getting into here. I also started writing this as soon as I got home that night, because I just wanted to remember and document that feeling. Sloth-like would be a good way to describe it. Overall sluggishness. Basically all of those terms that the announcer spouts off in 3.3 seconds at the end of a Lexapro commercial. That is how I felt after eating dinner at Alfredo of Rome. DISCLAIMER: This is not as bad as I’m making it sound. The food is good. But it is heavy. BE FOREWARNED.

Situated right near (and basically in the heart of) Rockefeller Center, Alfredo of Rome is one of those places that you probably have walked by a dozen times and never REALLY noticed. Inside is kind of what you would expect from a tourist-zone restaurant: big. colorful. nice art on the walls. One thing I find that is a rarity these days is SPACE between tables. I am hardly a big person and I find myself wishing I could suck in my kneecaps just so I can squeeze into the little tables at the quaint Brooklyn eateries that line my streets. So that part was nice. I got to share this meal with The Men Who Dine also, so we got even more food than we bargained for. Italians like to feed people, in case you didn’t know that.

Fun fact: Alfredo of Rome actually exists in Rome and it is the birthplace of the original Fettuccine Alfredo dish. Pretty cool. And if there was ever a good excuse to eat fettuccine alfredo, I think this would be it. As they say: when in Alfredos of Rome. I waited three paragraphs to deliver that terrible joke – I think I did pretty good.

The first course was deceptive to the rest of the meal; a cracker thin pizza topped with a light-handed dousing of gorgonzola cheese, pear, and truffle oil. So light and crisp, you could probably eat half of this large pie and still be hungry. The fettuccine alfredo on the other hand…brace yourself. They bring this to you in an enormous bowl, and mix it for you, tableside – like the Italian version of guacamole. When it’s placed in front of you, you have very high expectations, and I have to say my expectations were pretty much met. I thought it needed a little salt, but there is so much cheese in there, I could just be crazy. Super rich, comforting, and perfectly fresh pasta – what a difference that makes.

The fettuccine (or the richness of it, rather), had set the tone for the rest of the meal. The ceasar salad was next, and it was delicious, but a little heavy on the dressing (which was also delicious). Wedges of iceberg topped with plenty of shaved parmesan, semolina croutons, and creamy ceasar dressing. Can’t go wrong.

My favorite pasta of the night had to be the rigatoni with lobster in vodka sauce. I have zero and I mean zero complaints about this one. Seasoned right, pasta cooked perfectly, nice amount of lobster meat, and fantastic vodka sauce. You should definitely order this.

My second favorite dish was the pasta pomodoro – in case you’re noticing a pattern – you should be coming here with the intention of eating pasta. And lots of it. The fresh pasta is just SO good, it makes it hard to stop eating it.

The desserts were insane. Maybe we were all just SO full, but still, the desserts were rich, indulgent, and completely superfluous…though we weren’t exactly turning them away. The chocolate mousse with blueberries, mini marshmallows (I know just trust me), and chocolate cookies was so addictive, I had to ask the waiter to remove it from the table. The blueberries and the marshmallows were not what I expected to see in there, but it all works and it’s delish. AND blueberries have antioxidants so you know, it’s good for you.

Panettone bread pudding. Eh. I hate panettone so maybe this is a personal thing but I would skip this. Didn’t love it.

Profiteroles and whipped cream and chocolate and yea. This is nothing special but it’ll do. I would highly recommend going with SOMETHING chocolate here because the chocolate cake was great – again, super rich, but so chocolatey. Yum.

If you’re in the area and don’t have any immediate plans after your meal…I’d go in for the fettuccine and the chocolate desserts alone. Expect to roll home. Or take a nap in the street…this is NYC after all.