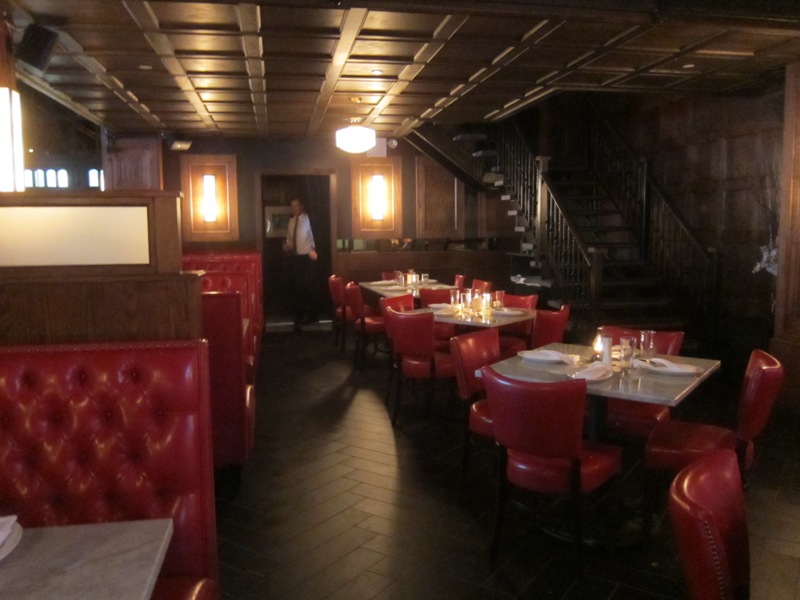 Attention LIRR commuters! I have exciting news: you can finally get decent chow in the immediate area surrounding the dirty sinkhole that is Penn Station!

Hard to believe aint it? This is my struggle as a food writer and food eater of NYC. When someone asks me where to eat in the mid-30’s “around Penn Station” I cringe. Seriously. Every. Single. Time. Because there’s nothing good there. I usually recommend getting sloshed at one of the Irish bars and then trudging your way through Penn to order up some Taco Bell or Pizza Hut before sitting down and inhaling your feast, all the while thinking “this is my life. I’m two Gorditas away from sadness.” Fortunately, Pennsylvania 6 has hit the map, and you can now partake in some good food and drink before you hit the train. Even if you’re not a commuter, this is a great bet if you’re in the area. Seriously, I actually visited twice in the same week! I was at Galway Hooker (put away the judgment, thanks) and got hungry…and literally it was the first place that popped into my head. Good, good sign.

Penn 6 has a nice Old New York feel to it – white tablecloths, red leather, dark wood bar. Guess the only thing that makes it “New” New York would be the giant TV screens (perfect for game-watching) and the upscale menu. This is not your typical bar food, ladies and gentlemen. They have bone marrow on the menu. And it is delicious. Let’s get into that a little, shall we? The menu at Penn 6 really is not what I expected, but I was beyond surprised and delighted at most of the dishes. Starting out with Blue crab mac and cheese ($15). Um, why have I never had this before? Sure I’ve ingested my share of shellfish in mac and cheese before (mainly Lobster) but never crab. SO good. Creamy, cheesy, and delicious chunks of crab strung through everything. A MUST order. I had this both times and it was devoured with reckless abandon.

When I saw bone marrow on the menu, I was a little hesitant, but I figured it was go big or go home. If you’ve never had bone marrow before, I’d describe it as “nature’s butter”; it’s a little greasy (ok a lot greasy) and gelatinous in texture, but it’s really great here topped with pickled onions, and a breadcrumb, parsley, and garlic gremolata ($12). Spread a little on some of the toasted bread and you got yourself one heavenly bite. Or many bites, in my case.

Let’s talk cheese. Burrata, to be exact. Honestly, it was good, but I wouldn’t go running back there for this. Burrata is supposed to be super creamy on the inside, and I felt that this one was not up to par with some others I’ve tried. I’d skip this and go for the Oyster po’boys instead ($12). Me? Ordering oysters? I know. I am not a fan normally, but these are fried and topped with a creamy slaw and bacon. Soooo…if you fry it, I’ll try it. And the pieces of bacon on top were almost all you could taste anyway. To a more refined palate (or an oyster lover), this might be a con instead of a pro, but for me..PRO ALL THE WAY.

Penn 6 also has daily specials, and we happened to be there on Tuesday, the day of “Korean Fried Chicken” ($22). Granted, it was not the best Korean fried chicken I’ve ever had (talking to you, Bon Chon), but it was good. Crispy and spicy skin, with a slow heat that sneaks up on you.

However, if you’re gonna go with meat at Penn 6, I’d go with the burger ($19), hands down. I actually had this on my second visit to Penn 6 and I’m almost sad I skipped it the first time. The meat they use in this burger is fantastic – it’s one of those burgers where you can really just taste the salty, juicy deliciousness of the meat without killing it with 900 toppings. Loved it. The juice runs down your fingers though, so be forewarned, it’s not necessarily a sexy option…but then again I find meat juice incredibly sexy.

One dish I had conflicts with was the Lobster roll ($26). It’s not a roll! It’s a roll turned into a sandwich (see pic)! Call me a purist, but I actually felt that the use of a burger bun as opposed to a hot-dog style roll made it taste different. Was the lobster mixture tasty? Yes. Would I order it again? Probably not. I like my lobster rolls to look like lobster rolls. No faking. Sorry I’m not sorry.

If you’re going to do some sides at Penn 6, I will highly recommend the brussels sprouts and the sweet corn pudding ($8). The brussels sprouts are sauteed in brown butter, so don’t worry, you’re not really being healthy. They’re crisp and salty and wonderful. The sweet corn pudding is exactly that: sweet, corny, and uber creamy – a little shaved grana padano cheese on top adds a little hint of salt that it desperately needs.

Now that summer is FINALLY approaching, it felt only right to get down with some “S’mores”. I use quotes because it’s not traditional s’mores, but it’s an adaptation. I’m ok with adaptations on s’mores, just not lobster rolls. This was a chocolate mousse topped with marshmallows, and when they deliver it to your table, they pour liquor over it and set that shit on fire. You are left with toasty marshmallows, creamy chocolate, and a liquor aftertaste. The aftertaste bugged me a little, I can’t lie, but it was still enjoyable.

But speaking of alcohol, if I were to go back (which I def will), I would order the Drunkin’ Donuts again. What a great name. Little pillows of hot donuts served with bourbon caramel (NOM), dulce de leche, and passionfruit sabayon. I’m noticing a trend of donuts + passionfruit. Not sure what that’s about but I’ll allow it.

For all my Queens friends, I kindly ask that you hit this place up next time you’re in the mood for some grub and drinks near Penn. It’s literally down the block on 31st st btwn 6th and 7th, and it kicks the shit out of any other place in the area that I’ve tried recently. Is it cheap eats? No. But it’s not outrageous and it’s WORTH IT. There will always, ALWAYS be a place in my heart for drunken T-Bell, but sometimes you gotta clean up your act a little, ya know?