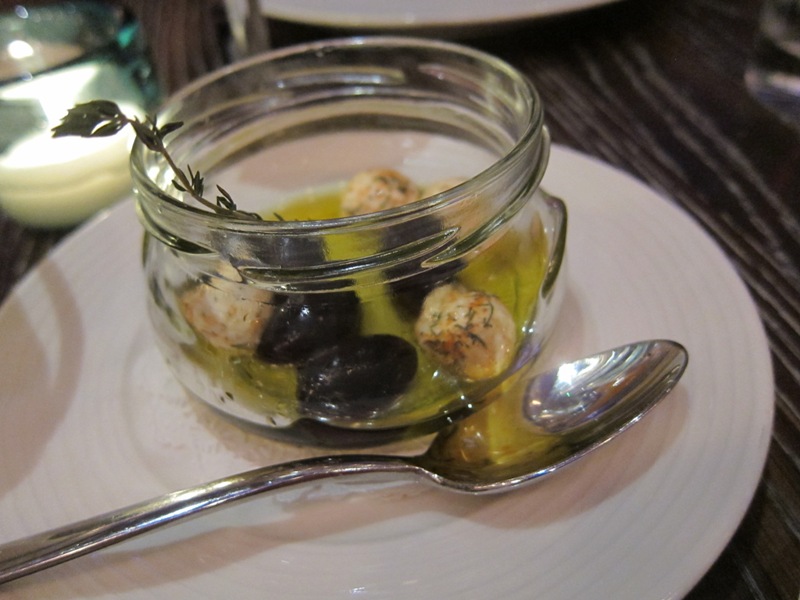 Word has been getting around town that I am half Greek – so what does this mean for me? It means invitations to test out new Greek restaurants in the city. It’s a tough job, but somebody’s gotta do it. Someone hand me a sprig of dill to wear as a crown around my head.

Anyway…I hit up Nerai last week, a Greek fusion newcomer in Midtown East, and it was pretty great. The space is beautiful and bright, with a lot of crisp white decor and mellow lighting – it definitely reminded me of the trendy (and slightly Americanized) restaurants in Mykonos.

As for the food, I stuck with the staples mostly, since I felt that was the best way to judge the restaurant in terms of authenticity and overall taste. Obviously, you start with the spreads: tzatziki, skordalia, and tarama. Those are placed in order of deliciousness. The tarama was ok but it wasn’t the best I’ve had, and that’s normally one of my favorites. It’s fishy though (and it’s supposed to be), so if this isn’t something you grew up with (like me), I’d proceed with caution. The skordalia, however, was delectable; a perfect mix of smooth, pureed potatoes, garlic, olive oil, and garnished with slivered almonds and saffron that gave it a light yellow color. This was devoured rather quickly with the warmest, freshest pita bread I’ve had in a long time.

Now, not to toot my own horn or anything, but I make a damn good spanakopita (spinach pie wrapped in phyllo dough), so when I go to a Greek place, I always get this to see how it compares to mine. Nerai’s little circular bundles of spanakopita with tzatziki foam and olive oil were actually really solid. The phyllo remained nice and crispy, while the inside was hot and filled with feta, just the way I like it. Double up on this order if you’re with more than one other person because they will go FAST.

As I mentioned before, I stuck with the staples at Nerai. Guess what’s next? LAMB. Lamb chops, to be exact. How can you go to a Greek restaurant and not try the lamb?? That’s like going to Little Italy and not having pasta. The lamb chops at Nerai were cooked perfectly, and they were so tender I picked them up and started eating them off the bone, like chicken wings. That’s how you know you have a good piece of meat. Or maybe I just need to brush up on my table manners. Regardless, the only complaint I would have would be that the potatoes needed a bit more lemon. I am BIG on lemon potatoes in Greek cuisine, and I think that was the only thing missing from that dish. The potatoes were good, but they could have been better.

Speaking of potatoes, let’s talk about the “Greek fries”. I don’t really know what made these “Greek”. They were fries. Good fries, mind you, but I thought maybe there would be feta and oregano, or dill, or SOMETHING inherently Greek about them. But…no. If they’re going to sell something as “Greek”, the least they could do is wrap them in a mini Greek flag or something…

Lastly, we tried the Short Rib Youvetsi. Ok, so this isn’t typically a “staple” for me, but it’s a staple for other people and it sounded delicious, so I had to. Youvetsi is like a beef and orzo stew, but Nerai stepped it up by making it short ribs in an orzo and tomato confit sauce. YUM. You want this in your life. There is a hint of cinnamon that wafts up and hits your nose right before you take a bite, and the meat just falls apart as soon as you dive in. Don’t be alarmed by the cinnamon by the way – it’s a classic Greek accent with meat dishes and it’s surprisingly tasty (think of it as a meat enhancer). The orzo and tomato confit was creamy and had the consistency of risotto; the salty bite from the piave vecchio cheese was a nice touch. So, so good. I highly recommend this one.

Once again, we got too full on savory, so we left no room for dessert. That said, I’m sure they are solid, and it gives me a reason to come back…not that I ever need a reason to eat great food. Nerai might not be my Yia Yia’s kitchen or some of my go-to, no-frills joints in Astoria, but it’s a great choice if Greek fine dining is on your radar. And let’s face it, upscale Greek food is a bit underrated, so I’m glad places like Nerai are making it more accessible.