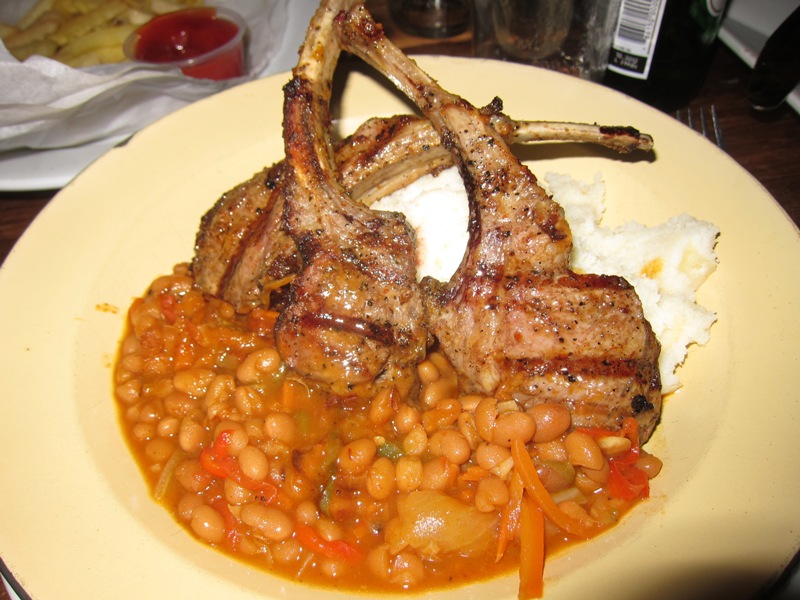 When was the last time you had South African food? Hmmm yea…about that. I don’t think I ever have, but I had a great experience at Madiba recently in Fort Greene. My friend Lauren had her birthday dinner here on New Year’s Day, and despite some wait time and tight dining conditions, it was really good food. I would love to go back with a smaller group, but I got a nice sampling of food this way, so believe me I’m glad I was involved. I will also add that they gave us a free bottle of wine to make up for the wait time (we had a reservation at 8:30 and didn’t get seated til after 9), and they gave us a free round of shots at the end of the meal for Lauren’s birthday too. So ok…at least they did what they could…or they just wanted to get us drunk so hopefully we would forget. Let’s dive in…

How much do I love chicken wings? Let me put it to you this way, if you gave me a choice of only one appetizer to eat for the rest of my life at every meal, wings would probably be it. We shared the organic chicken wings Peri Peri – wings basted in a spicy dried pepper oil with garlic and vinegar. These wings were on the small side, but very flavorful with a lot of kick, I highly recommend more than one order for a group of ten because these went QUICK…

I learned during my meal at Madiba that spices and vinegar are essential ingredients to the cuisine. The fries or “slap chips” as they are called here, are soaked in vinegar then tossed with salt and served in a paper bag with ketchup. The vinegar is great, but I frown slightly upon the decision of putting them in a paper bag because this caused them to steam and made them soggy. If the fries were crispy it would have been a 10 instead of an 8 on the delicious french fry scale. We still gobbled most of them up, but we waited over 30 mins to be seated (PAST our reservation time), so we were just a bit hungry. The fried calamari was also excellent – these stayed crispy and the tartar sauce was nice and tangy. Yum.

For my main dish, I got “Pap & Vleis”, lamb chops served with white cornmeal (pap) and chakalaka. Chaka who? Chaka Khan? None of us knew what that was either, and after a few minutes of “boom chakalaka” jokes, we read the description (we’re so smart) to discover that Chakalaka is a spicy mix of baked beans, carrots, tomatoes and onions. The lamb chops were slightly overcooked, but not terribly so, and the flavor was awesome with all of the spices. I really liked this chakalaka business too – I wanted to soak it up with bread but there was none around so I used the lamb chops and fries instead. Oh what a hardship.

Dessert time! I read some reviews on this place before going, and the reviews were all raving about one thing: malva pudding. Again no idea what it was, so I read the description: “a sweet, spongy caramelized pudding of Dutch origin made with apricot jam”. Now you know my feelings on jam, but I still wasn’t overly impressed, though I forced myself to order it based on the waiters reaction when I asked about it – he said it’s their most popular dessert. A few moments later, I understood why. OH. MY. GOD. This thing was good – my crappy pic doesn’t do it justice so ignore that. Served with vanilla ice cream, it’s a small sponge cake with a caramelized sugar crust all around it, you dig your fork into the cake and come out with a just-sweet-enough bite. The inside is made with apricot jam, then soaked in a sugar-cream mixture, giving it a just-sweet-enough taste and a moist texture. No one wanted to order it, and yet everyone at the table wanted a second bite once they tasted it. #win